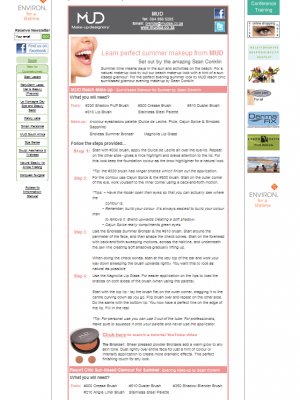 Read more about this artist/trainer:

Gil Romero has been an educator with Make-up Designory for over 15 years. He is a graduate of Willow Park High School in Apple Valley, CA, Cinema Make-up School in Los Angeles, CA and Make-Up Designory. Additionally, he received training in make-up design and artistry from UCLA Extension and Schell Sculpture Studio, and has continued to further his own educational experiences by taking courses in management and instructional methodology through UCLA Extension, University of Phoenix, Victorville Community College, Skillpath and the Coalition of New York State Career Schools. Mr. Romero has lectured and demonstrated make-up techniques including injury simulation, the process of prosthetic construction and prosthetic application on behalf of MUD, both nationally and internationally. In 2009, he co-authored the second edition of Make-Up Designory’s Character Make-up textbook. As a professional make-up and special make-up effects artist, Mr. Romero has had extensive experience in film and television since 1995.

His work has been seen on television shows and films including The Unit, Scrubs, Prison Break, Untold Stories of the E.R., The Sarah Silverman Show, The Late, Late Show with Craig Ferguson, The Shield, America’s Next Top Model, Midnight Movie, Five Fingers with Laurence Fishburne, Route 666 with Lou Diamond Phillips, Rob Zombie’s House of 1000 Corpses, tattoo transfers for Sherri Moon-Zombie in The Lords of Salem and effects for the short film Wounded Embark of a Lovesick Mind by author/ illustrator and film director Gris Grimly. In addition to his film and television work, he has produced prosthetic make-ups and effects for Universal Studios’ Hollywood and Tokyo live- action stunt show WaterWorld, the Anubis puppets for The Mummy II: Chamber of Horrors, Busch Gardens Howl-O-Scream event character “Jack”, FuseTV/ Fangoria Chainsaw Awards, Lady Gaga and other live musical performers, and specialty trauma simulations for companies and professional organizations including one of the largest and most technologically advanced burn centers in the U.S., the Integris Burn Center.

0
0
Your Cart
Your cart is emptyReturn to Shop
Continue Shopping
Open chat
1
Hello,
How do we help you today?