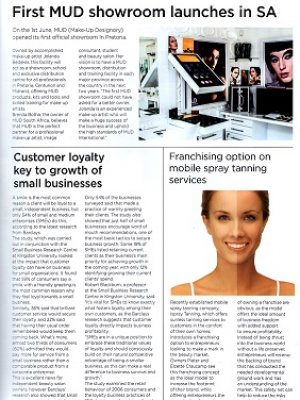 Breast Cancer Awareness Month, Addi Lang founder of “The Forever Changed Campaign” has joined hands with Uber Glam Fashion Design School and Blue Note Events to host “DRESS 4 LIFE” on the 17th October at the Maslow Hotel in Sandton. The fundraiser which supports the Forever Changed Campaign is twofold as it firstly launches the Forever Changed Documentary which has been created to provide a roadmap for newly diagnosed cancer warriors filmed by The African Motion Picture Company.
An emotional Addi Lang says “Since the press conference I held in October 2014 about becoming a reluctant warrior I have done a lot of research and felt the need to warn others and share the information that I have collected. Had I realized this sooner, it would have allowed me to make very different choices of treatment and the changes that I would have made. So after having had a mastectomy, reconstruction, chemotherapy which did not work very well for me I have information to share with others in addition warnings of knowing ones health rights. I feel that whilst it is too late for me to change anything for myself it is through this campaign that I have found meaning and purpose to save one life at a time and to try and warn others so that they do not have to go through the pain and suffering that I have over the past year. It is also very important for me to share my story with passion that there is a life after diagnosis and can be one of hope.”

The second part of DRESS 4 LIFE is pure entertainment ala “fashionista extravaganza” with world class performers taking to the stage to support the Forever Changed Campaign and lend a hand to friend and colleague, battle weary warrior Addi Lang. Owner of Uber Glam Fashion Design School, Lelanie Jacques has created the exclusive designer ball gown for Addi to walk down the ramp and is specifically themed as the Monarch Butterfly. As butterflies have inspired Addi to live life deliberately with hope she believes that this ballgown will create awareness of the impending extinction of this magnificent butterfly.

The music that will be played for this segment has been written recording artist Aly Cook – 5 Times Nominated New Zealand Female Country Artist of the Year (Awarded 2012) and NEXT New Zealand Woman of the Year nominee (Arts & Culture) 2011. After the release of this song which is aptly called “Forever Changed”, Aly Cook will continue to donate a portion of the sales through ITunes to the Forever Changed Campaign. Performed by Aly Cook with backing by The Dions and recorded last week at Bay City Sound Studios in Nelson, New Zealand, the song is produced by Mark Patterson with release on Futures Entertainment. Studio Filming was done by Horizon Aerial Imaging in Nelson New Zealand. Artist Co-Ordination Key 2 Artist Promotions is Therese McKee based in Australia. The Forever Changed Documentary will include this as the title song.

“Creativity in its purest form finds it way to this stage as art, fashion and music with a message” is the brief to the models, designers, dancers, musicians and singers from creative stage director Deeno Naidoo, owner of Blue Indian Pictures. The winning model and designer will be selected by a panel of judges and the 2 winners will be announced. Prizes are sponsored by JustYou Model Management, Uber Glam Fashion Design School, MB Studio Community, MUD Studio Sandton and The Palazzo Hotel.

On stage in South Africa for the first time in 20 years will be Zac Hilon, the dynamic South African born singer songwriter who is currently the headline act in a musical that is taking Europe by storm. Hilon has just signed a management deal in Europe and will be recording his upcoming album in France & Switzerland. He is a prolific songwriter his songs are currently being played on radio in the USA, Australia, South Africa United Kingdom and Israel. Originally from South Africa the international sensation formed the band ‘No Way Out,’ which opened for Duran Duran and toured South Africa and it’s neighbouring countries. Hilon has performed at some of the biggest venues in Las Vegas and has performed on “Gimme The Mike” a FOX TV network. He moved to Los Angeles, landing regular appearances at The Universal Studio City Walk and Cabo Wabo in Hollywood.
Actor/recording artist/songwriter Emmanuel Castis who has recently relocated to the USA will fly in from LA to emcee and perform at this lavish fundraiser. The evening will also be the launch platform for singer/songwriter “ATLAS” performing with her live musicians. Peter Szewach who has performed stand-up comedy routines throughout South Africa, New York and Las Vegas will be making a guest appearance.

3 Original artworks have been donated by MB Studio Community Art Gallery in Sandton and will be auctioned in support of the Forever Changed Campaign. The pieces are currently being created with the butterfly effect theme and will be seen for the first time on 5th October. In addition visual artist John Adams will also donate a piece that he will paint during a live TV interview on the 2nd October that will also be up for auction. Guests will be welcomed on the evening with an MB Studio art exhibition and gift voucher valued at R1000. In addition each guest will receive a MUD Workshop  gift voucher valued at R450 from MUD Studio Sandton who will be doing all the makeup for the performers.

Tickets are available online www.uberglam.co.za on the EVENTS page at R120 per person.

0
0
Your Cart
Your cart is emptyReturn to Shop
Continue Shopping
Open chat
1
Hello,
How do we help you today?